..”We cultivate refinement without extravagance and knowledge without effeminacy;
wealth we employ more for use than for show, and place the real disgrace of pover
ty notin owning to the fact but in declining the struggle against it. [2] Our public men have,
besides politics, their private affairs to attend to, and our ordinary citizens, though occupied with the pursuits of industry, are still fair judges of public matters; for, unlike
any other nation, regarding him who takes no part in these duties not as unambitious but
as useless, we Athenians are able to judge at all events if we cannot originate, and instead
of looking on discussion as a stumbling block in theway of action, we think it anindispensable preliminary to any wise action at all. [3]“…. On March 1rst, 2013, at 21.45 we realised the public reading of the funeral oration of Pericles at Dimosio Sima; the site where it is considered to be initially pronounced. The reading was based on the History of the Peloponnesian War, Book Two, by Thucydides (translated by Eleftherios Venizelos). It was performed with the contribution of Orizontas team, artists and random passers. 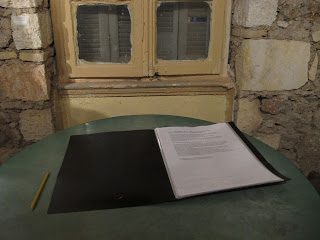 Reveries du promeneur solitaire;
A photo-roman based on "chapters-walks" by Hariklia Hari
An ongoing travel through subjective landscape experience and observations and a careful study of the spirit that derives from places.
Texts, photos and drawings (unless otherwise mentioned) © Hariklia Hari, 2013